Recipes » Side Dishes » Cornbread Dressing with Sausage and Pecans

Cornbread Dressing with Sausage and Pecans

by Brenda Score on November 1, 2021
Jump to Recipe
This post may contain Amazon or other affiliate links. As an Amazon Associate I earn from qualifying purchases. 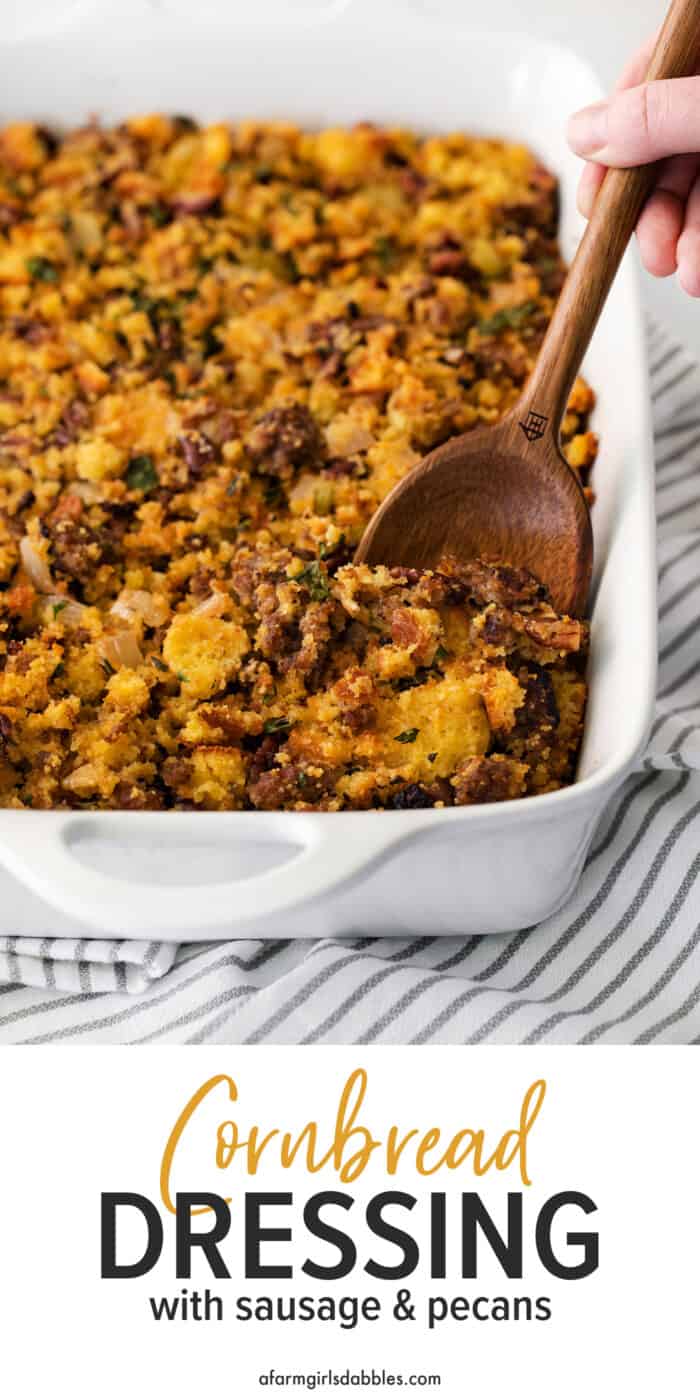 Rich and savory with a touch of sweetness, this Cornbread Dressing with Sausage and Pecans is the perfect addition to your Thanksgiving feast. Make with day-old cornbread to pull this together quickly before dinner!

I was well into my 30’s by the time I ate my first bite of dressing made with cornbread. And what a game changer for this Midwesterner – I was sold! The dressing was rich and savory, with a touch of sweetness. It was so good!

So now this Cornbread Dressing with Sausage and Pecans often graces our Thanksgiving table, alongside Blake’s smoked turkey. The sausage and pecans offer great flavor and texture with the cornbread, and I love the fresh herbs and touch of cider vinegar tang. It’s one of my favorite Thanksgiving side dishes!

With savory turkey, mashed potatoes and gravy, and green bean casserole on the menu, I like to include a Thanksgiving dish with a touch of sweetness. I think the sweet is what draws our kids to this dressing, too. Well, the sausage doesn’t hurt, either. We’re big sausage fans here.

Did you grow up with dressing or stuffing? I grew up with both, actually. Mom typically used bread or croutons, and often included raisins in the mix.

All you need for this recipe is day-old cornbread, sausage, pecans, and a handful of other simple ingredients.

How to Make Cornbread Dressing with Sausage and Pecans

This Thanksgiving dressing recipe comes together easily – no need to stuff it inside a turkey for great flavor!

For the best cornbread dressing, keep these few tips in mind:

This recipe began as a Thanksgiving side dish and it definitely fits in well with freshly roasted (or smoked) turkey, green bean casserole, mashed potatoes, and all the other good Thanksgiving fixings.

But that doesn’t mean Thanksgiving is the only time you can make this savory dressing recipe. It’s an easy way to make a simple dinner a little nicer, whether it’s some pork loin, grilled turkey, or even pork chops.

Can I Make Thanksgiving Dressing in Advance?

Yes, this cornbread dressing can be made one day in advance. Bake as directed then uncover and let cool. Coverage and refrigerate. The next day, let the dressing sit on the counter while the oven preheats to 350° F. Bake the dressing covered for 30 minutes, then uncover and bake for an additional 10 to 15 minutes, or until the top is crisp.

If you put it directly in the oven without allowing it to come to room temperature, it may need to bake for an additional 10 to 15 minutes.

How to Store & Reheat Leftovers

Dressing can be made 1 day ahead. Bake as directed and then uncover and let cool. Cover and refrigerate. To reheat, let dressing sit on the counter while oven preheats to 350° F. Then bake the dressing, covered, for 30 minutes. Uncover and bake for 10 to 15 minutes more, until top is crisped. If dressing is fully chilled when going into the oven, it may take an additional 10 to 15 minutes to get thoroughly heated.

We participate in the Amazon Services LLC Associates Program, an affiliate advertising program designed to provide a means for us to earn fees by linking to Amazon.com and affiliated sites. See our disclosure policy for more info.
Holiday Recipes Side Dishes Thanksgiving

24 comments on “Cornbread Dressing with Sausage and Pecans”