by Brenda Score on November 29, 2022
Jump to Recipe
This post may contain Amazon or other affiliate links. As an Amazon Associate I earn from qualifying purchases. 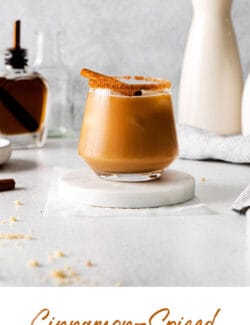 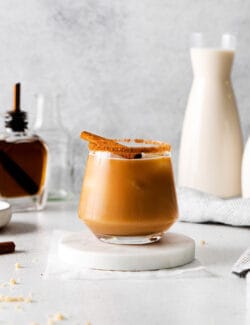 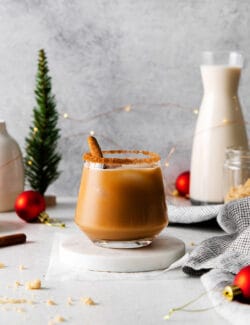 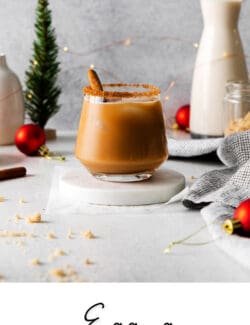 This Cinnamon-Spiced Eggnog White Russian recipe is a fun twist on the classic vodka cocktail. Made with eggnog, coffee liqueur, vodka, and a beautiful homemade cinnamon syrup – you’re gonna love it!

This lightly creamy Cinnamon-Spiced Eggnog White Russian is just the loveliest. With eggnog sitting in for the traditional cream, plus a gorgeous homemade cinnamon syrup, I welcome this decadent cocktail all winter long!

Whether you make your own eggnog or buy it from the store, this warmly spiced drink is a wintertime delight, and so fun for the holidays!

If you like a celebratory eggnog drink like I do, be sure to also check out this eggnog cocktail. It’s extra cold and creamy, blended with ice cream. And it includes a bit of Amaretto (almond liqueur), which I love!

To make the cocktail:

To make the cinnamon sugar rim:

If you’d like to go the extra mile with this drink, rim your glasses with cinnamon sugar. It’s not only pretty, but it tastes wonderful! You’ll need:

How to Add a Cinnamon Sugar Rim

How To Make a White Russian with Kahlúa & Eggnog

Once you make this white Russian with eggnog, you’ll never want to make it any other way!

Garnish. Add a sprinkle of ground cinnamon, a cinnamon stick, or star anise, if desired.

I like to play around with flavors. Does that come as any surprise?! Here are a few ways you could change up this cocktail:

This drink is perfect for holiday entertaining. And I appreciate the ease of creating my homemade cocktails ahead of time, with pitcher proportions. Here’s what you’ll need for a pitcher of eggnog white Russian:

Just measure these ingredients into a pitcher and store the big batch cocktail in the fridge for up to 4 hours. When ready to serve, give the pitcher a stir and then shake individual portions with ice!

Here are a few more of my favorite winter-y cocktails. Some are served hot, while others use winter’s best fruits or feature warmth from whiskey, bourbon etc.

for the cinnamon sugar rim:

We participate in the Amazon Services LLC Associates Program, an affiliate advertising program designed to provide a means for us to earn fees by linking to Amazon.com and affiliated sites. See our disclosure policy for more info.
Christmas Cocktails Drinks Holiday Recipes