by Brenda Score on October 15, 2021
Jump to Recipe
This post may contain Amazon or other affiliate links. As an Amazon Associate I earn from qualifying purchases. 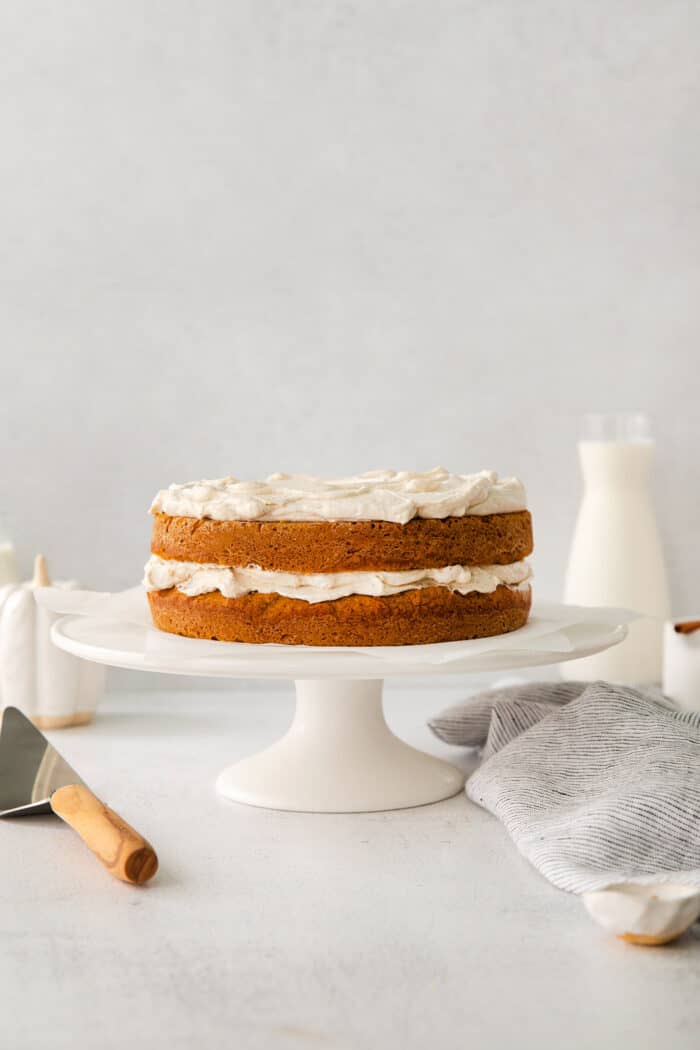 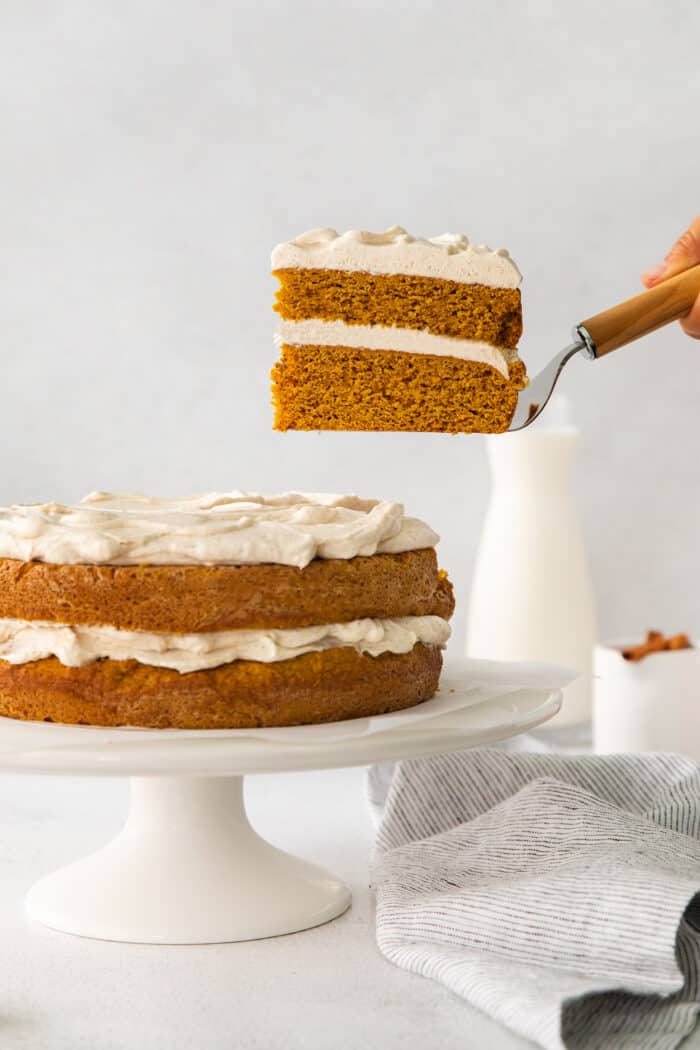 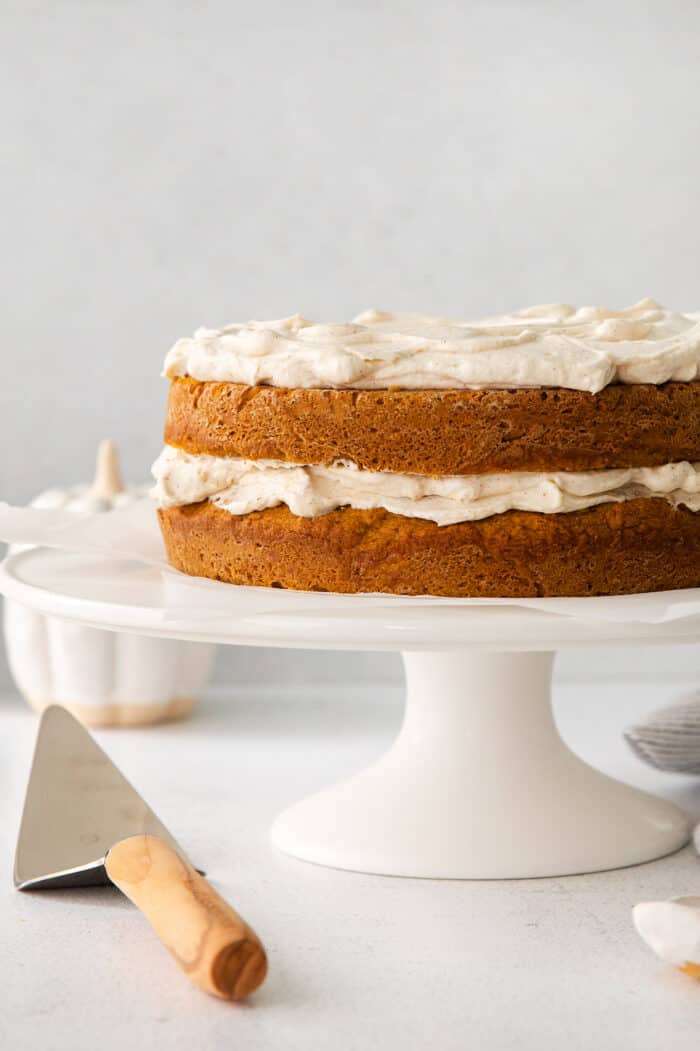 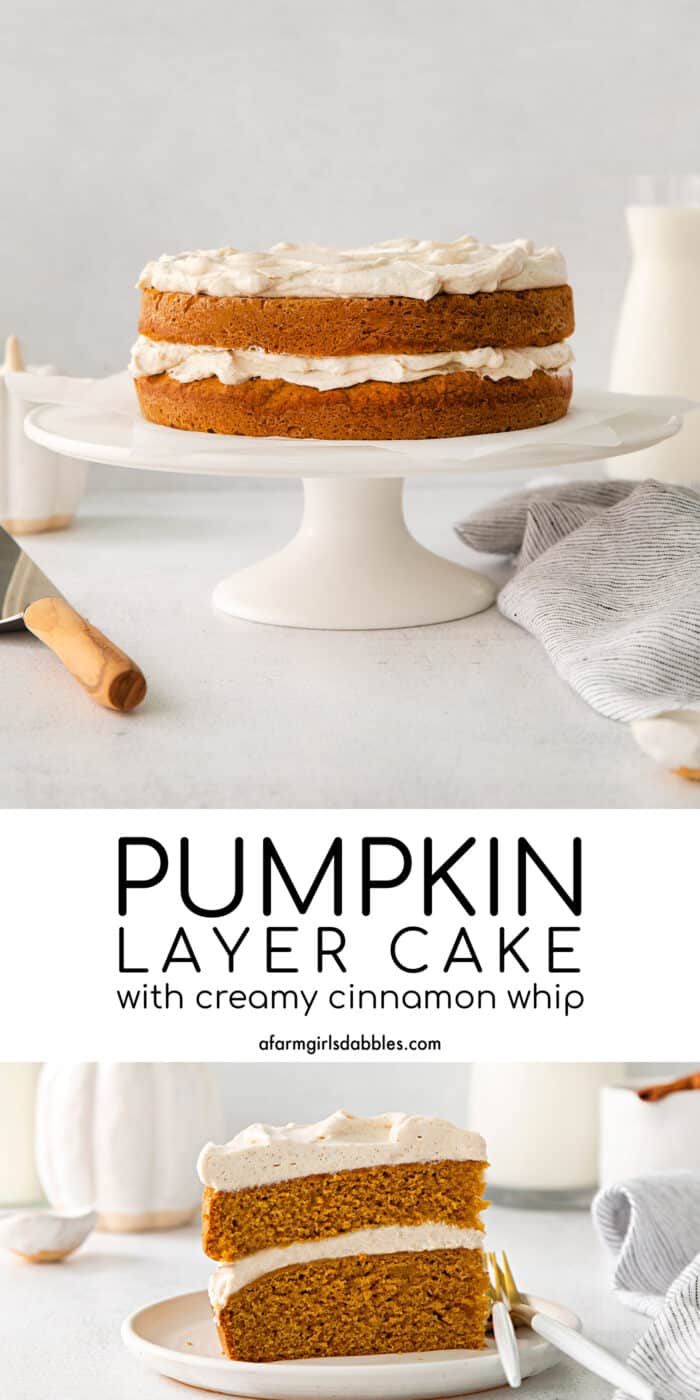 With moist pumpkin spice cake and fluffy whipped topping, this Pumpkin Layer Cake with Cinnamon Whip is not only decadent and impressive, but also easy to make! No special decorating tools required!

Our youngest daughter is always full of sweetness and compliments. And she’s a very truthful soul. So a number of years ago when Tessa declared that this Pumpkin Layer Cake with Creamy Cinnamon Whip is the best thing I’d ever made…I just knew this cake was a winner!

This impressive dessert is comprised of alternating layers of moist spiced pumpkin cake and the dreamiest, creamiest cinnamon-spiked whippy frosting. It’s easy to put together. I purposefully didn’t use any special decorating equipment, like frosting tips or special spatulas, so you could see just how approachable a beautiful layer cake really can be.

This fall pumpkin treat would look mighty gorgeous at any fall gathering, especially on your Thanksgiving table!

Then I discovered white whole wheat flour, which turns out to be the best of both worlds. The nutrition of wheat flour with the mild, light texture and flavor of white flour.

The cake is moist, beautifully flavored and textured, and my family loves it!

This decadent pumpkin spice layer cake is made with pumpkin, warm spices, cream, and cream cheese – plus baking staples.

FOR THE PUMPKIN CAKE:

FOR THE CREAMY CINNAMON WHIP:

How to Make Pumpkin Layer Cake with Creamy Cinnamon Whip

One of my favorite things about this cake is just how easy it is. No need to get overwhelmed by making this layer cake!

For a moist cake with creamy, fluffy cinnamon whip there are just a few things you’ll want to keep in mind.

This pumpkin layer cake should be served chilled. Since it’s a layer cake, you can cut the pieces thinner than you might normally, which makes this a great dessert for the Thanksgiving dessert table or any other fall gathering. Dust a little extra cinnamon across the top if you like!

Leftover pumpkin cake should be stored in the fridge, tightly covered or in an airtight container. It’s best when enjoyed within 3 days.

Can I Freeze This?

I don’t recommend freezing the assembled cake as the cinnamon whip will lose its texture during the thawing process. However, you can freeze the individual pumpkin cakes. Just allow to cool, then wrap in plastic wrap and foil. Place in the freezer for up to 3 months and thaw in the fridge. Then make the whippy topping and assemble!

for the pumpkin cake:

for the creamy cinnamon whip:

We participate in the Amazon Services LLC Associates Program, an affiliate advertising program designed to provide a means for us to earn fees by linking to Amazon.com and affiliated sites. See our disclosure policy for more info.
Cake Dessert Halloween Holiday Recipes Thanksgiving