by Brenda Score on December 5, 2016 (updated December 22, 2020)
Jump to Recipe
This post may contain Amazon or other affiliate links. As an Amazon Associate I earn from qualifying purchases. 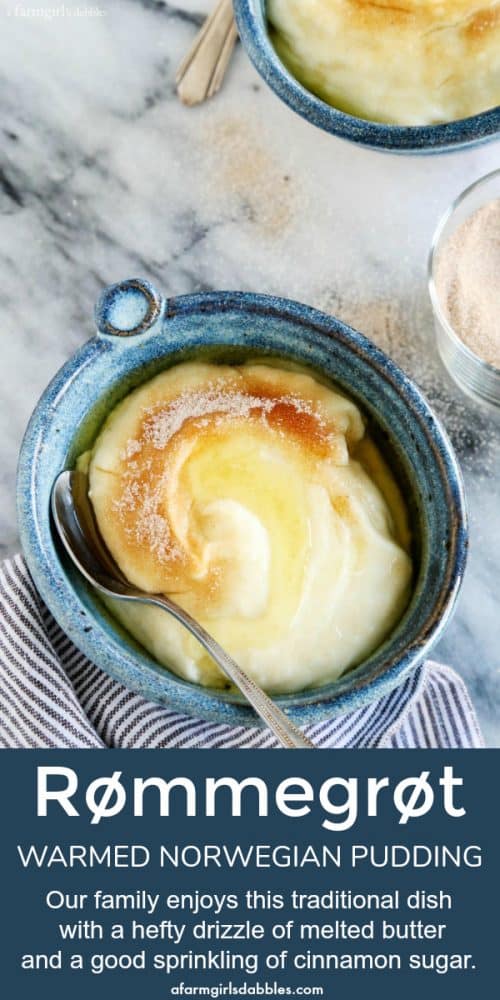 Rømmegrøt is a warmed Norwegian pudding that our family likes to eat with a hefty drizzle of melted butter and a good sprinkling of cinnamon sugar. It’s a longtime family tradition from my husband’s side!

Rømmegrøt is a Norwegian Family Tradition

My heritage is mostly German. Blake’s is 75% Norwegian, 25% Swedish. And ever since our first Christmas together (1999), I had been hearing about Rømmegrøt in different conversations across his family.

While Blake’s family members were saying I should try rømmegrøt, some were also telling me to give lutefisk a fair shot. Now I’m a fairly adventurous eater, but I could die quite happily never letting lutefisk cross my lips. It’s just something I don’t feel the need to accomplish in my lifetime. Ever since then, I have (unfairly) lumped these two Norwegian foods together in my mind, summing them both up as unworthy of my taste buds.

Boy, was I wrong. (At least about the rømmegrøt…I still haven’t tried lutefisk!)

Sons of Norway and my First Rømmegrøt Experience

It was a cold March day, sun-less and dreary, when we visited the Sons of Norway in Fargo, North Dakota with Blake’s family.

Stepping inside, there really was no evidence that we were actually in Fargo.

The place gave a nod to its Norwegian ancestry everywhere we turned. The whimsical wood carvings of trolls, beautiful rosemåling, huge framed paintings of valiant Vikings, and oh-so-lovely wallpaper designs were the only decor in this space of dark paneled walls.

It was here that I ran head-on into my first experience with rømmegrøt.

And I gave in and let the kind lady hand me a bowl of this simple, warm Norwegian pudding. I was advised to pour some melted butter over the top, followed by a generous sprinkling of cinnamon sugar.

After finishing bowl #1, I went back for bowl #2. With more butter and more cinnamon sugar the second go ’round. That stuff was wonderful!

Then I asked one of the servers if they might be able to share their rømmegrøt recipe with me. Because, first, I wanted to make this at home because it was so delicious. And, second, I wanted to preserve a bit of Blake’s heritage, to pass this tradition on down to our own daughters.

I was immediately invited back into the kitchen, where I met Vivian.

Standing at the stove with a red apron tied around her back, Vivian was stirring the thickening milk mixture, watching the thermometer rise. She chatted me through the recipe and was happy to share it with me.

The recipe showed obvious visible signs of being well-loved, with its crinkled paper and bent corners. Several lines in the directions had been crossed out, with revisions handwritten in ink. Those are always good signs of a tried and true recipe.

So why did it take me so long to actually get around to making rømmegrøt myself? There’s an easy answer to that >>> I lost the recipe and the photos I took that day.

But, thankfully, while organizing photo files earlier this year, I found them again. I proceeded to make a duplicate copy of the photo file and placed it directly onto my computer’s desktop. I’ve been waiting almost all year to share this recipe with you!

This rømmegrøt recipe is a simple mixture of milk, butter, flour, sugar, and salt, the very same recipe that I enjoyed at Fargo’s Sons of Norway and basically the same recipe that I’ve found in many cookbooks and on many online sites.

But I am now (Dec. 17, 2016) updating this post due to reader feedback. “Rømme” translates to sour cream in Norwegian, meaning a true rømmegrøt recipe would have sour cream in it. This recipe does not, so it would technically be called fløtegrøt. I am not going to change the title of this post and recipe, as this is exactly how so many people know rømmegrøt, including my husband’s entire side of his very Norwegian family. All I can say is that everybody makes their own variations on recipes, in both ingredients and recipe titles, and this is one that has obviously found its own alterations along the way from Norway to America.

Blake’s mom (now 84 years old) shared with me that she grew up eating this warm dish two different ways:

Loree, my mother-in-law, recalls her own mom making rømmegrøt whenever there was excess cream from milking the cows. This provided an inexpensive way to put food on the table.

And when making this for her own family, Loree remembers her three sons being in favor of her switching from cream to skim milk. This resulted in rømmegrøt that was less rich…which simply meant that her sons could eat more of it.

Loree was sure to share her best advice with me, about how to most enjoy a bowl of warm rømmegrøt:

Adapted slightly from the recipe that Vivian Wensel shared with me in the Sons of Norway kitchen in Fargo, ND.

As an Amazon Associate and member of other affiliate programs, I earn from qualifying purchases.

We participate in the Amazon Services LLC Associates Program, an affiliate advertising program designed to provide a means for us to earn fees by linking to Amazon.com and affiliated sites. See our disclosure policy for more info.
Breakfast Christmas Cuisines Dessert Holiday Recipes Scandinavian Thanksgiving