by Brenda Score on August 8, 2022
Jump to Recipe
This post may contain Amazon or other affiliate links. As an Amazon Associate I earn from qualifying purchases. 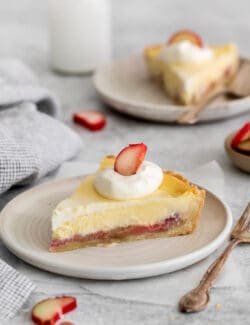 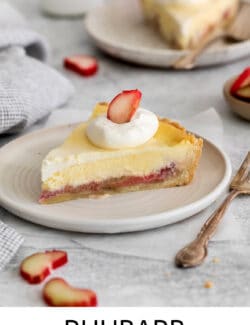 This Rhubarb Cheesecake Pie features an easy pressed-in crust that tastes like a buttery shortbread cookie. It’s filled with layers of sweet-tart rhubarb and creamy cheesecake, and a thin topping of sweetened sour cream. Absolutely delightful!

This incredible rhubarb pie recipe is my own riff on a local restaurant‘s “Rhubarb Delight” pie that our whole family loves. It features an easy pressed-in crust that tastes like a buttery shortbread cookie (so good!!) – and filled with layers of sweet-tart rhubarb and creamy homemade cheesecake, then topped with a thin spread of sweetened sour cream.

I hope you enjoy this delightful pie as much as our family does!

Like rhubarb pie? Be sure to also check out my grandma’s Rhubarb Custard Pie!

Just look at all those beautiful layers, let’s make this!

This pie has an easy-to-make pressed-in crust that’s filled with 3 distinct layers of deliciousness. As you can see, even with the four different portions, there are still very few ingredients involved!

How to Make This Rhubarb Pie

Let’s break it down, layer by layer. It’s easy, I promise!

Just a few tips, for the best rhubarb pie with a layer of homemade cheesecake!

Can I Use Frozen Rhubarb?

I get this question a lot with rhubarb recipes. And while I will often say that frozen rhubarb will work in a pinch, I believe you should use only fresh rhubarb for this pie. When rhubarb thaws, it releases a lot of moisture and the rhubarb itself gets very soggy and limp – which isn’t good for the crust, as the rhubarb bakes directly on the crust.

How to Serve Rhubarb Cheesecake Pie

Serve this cheesecake dessert straight from the fridge or within 20-25 minutes after removing it from the refrigerator. Cheesecake is always best enjoyed chilled!

I like to serve this pie with dollops of fluffy, very-lightly-sweetened whipped cream. If you want to go the extra mile when serving this to guests, press a thin slice of fresh rhubarb into the whipped cream!

This pie definitely needs to be stored in the refrigerator. It will keep well in an airtight container for up to 3 days.

for the rhubarb layer:

for the cheesecake layer:

for the sour cream layer:

Store in the refrigerator for up to 4 days.

From a farmgirl’s dabbles. Inspired by a pie called “Rhubarb Delight” from Joseph’s in Stillwater, MN. Crust adapted from my Aunt Patsy’s Strawberry Pie.

We participate in the Amazon Services LLC Associates Program, an affiliate advertising program designed to provide a means for us to earn fees by linking to Amazon.com and affiliated sites. See our disclosure policy for more info.
4th of July Cake Dessert Holiday Recipes