by Brenda Score on December 13, 2022
Jump to Recipe
This post may contain Amazon or other affiliate links. As an Amazon Associate I earn from qualifying purchases. 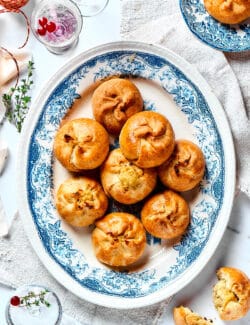 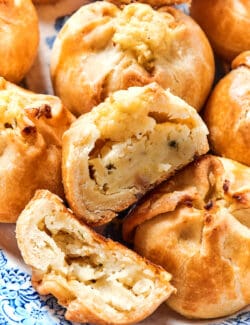 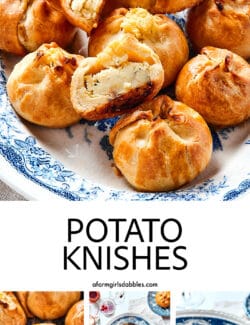 Potato Knishes feature a flavorful mashed potato filling that’s wrapped in a thin dough and baked to golden, flaky perfection. It’s a popular Jewish recipe, aka New York knish, and this homemade version is simple to make and oh-so-good!

Potato Knishes – aka New York Knish – feature a super flavorful mashed potato center that’s wrapped in a thin dough and then baked to golden, flaky perfection. I love all kinds of potato dishes, so this is my kind of comfort food!

In this classic Jewish recipe, Russet potatoes are boiled and mashed until creamy, then combined with caramelized onions (YUM!), and wrapped in a thin homemade dough and baked. The end result is a flaky golden outside and a rich, creamy, flavorful inside. They’re irresistible!

Besides being delicious, they’re also incredibly versatile. You can enjoy them hot, at room temperature, or even cold (they’re great picnic food!).

They’re hearty and filling, too. Which makes them perfect for a light lunch or snack, or a side to protein like steak, pork chops, turkey, or chicken.

Knish is an Ashkenazi Jewish recipe made with a potato filling wrapped in a light, flaky dough that’s baked until golden and flaky.

While there are many variations that include deep frying knish, the traditional dish is baked and not fried.

Knishes became popular in New York City in 1910 when Yonah Schimmel began serving the dish from a street cart in Manhattan’s Lower East Side. The snack exploded in popularity – you could find it on nearly every corner in New York, from Jewish restaurants to street carts.

And that’s why people often refer to these as “New York knish”!

They eventually declined in popularity and many of the carts went out of business. But they’re still a popular dish in the Jewish community.

Potato knishes begin with a simple dough that’s made with pantry staples. The filling is made with just a few ingredients, too – the main one being the potatoes. See the recipe card for the full measurements.

How to Make Potato Knishes

These potato knishes come together easily. I find the process of working with the dough and shaping the knish both fun and rewarding!

Here are a few tips for making potato knishes, as well as a few variation ideas.

Do You Eat Knish Hot or Cold?

Potatoes knishes are most commonly enjoyed hot, but they are also delicious at room temperature and even cold.

They’re very versatile for that reason and are great for packing in lunches and taking on picnics.

What Do You Eat With Potato Knishes?

Potato knish is traditionally served with mustard, horseradish, and/or sour cream for dipping. Sauerkraut is also a popular side to enjoy with a knish.

Enjoy as a snack or lunch, or serve them as a side dish, maybe with some chicken and vegetables.

The best way to store potato knishes is in an airtight container in the fridge. You can also wrap them individually in plastic wrap or a plastic baggie, so you can grab one and go (for picnics, lunch on the go, etc).

To reheat, place in the oven at 350° F for just 10 minutes or so. You can reheat them in the microwave but you won’t get the same flaky texture.

Can I Freeze These?

Yes, you can freeze any leftover knishes. Once they’ve cooled, flash-freeze them in a single layer on a baking sheet, then transfer to a freezer-safe bag or container. Freeze for up to 3 months. Thaw in the fridge, then reheat in the oven.

We participate in the Amazon Services LLC Associates Program, an affiliate advertising program designed to provide a means for us to earn fees by linking to Amazon.com and affiliated sites. See our disclosure policy for more info.
Christmas Easter Holiday Recipes Side Dishes Thanksgiving Vegetables