posted September 13, 2013 by Brenda // 36 Comments »
This post may contain affiliate links to products we use and love.

I’m only a teensy bit obsessed with all things marshmallow. Did you know that about me by now?! I find more and more excuses to stir a little marshmallow cream into this and that and the other thing. I can’t help myself. I ♥ it!

And when I tasted the fluffy hidden surprise inside these Chocolate Cupcakes with Pumpkin Spice Marshmallow Filling and Chocolate Buttercream (a mouthful, I know!)…I knew I had reached a new level of marshmallow bliss. Even our oldest daughter said, “That filling tastes like pumpkin pie!”

And it tastes sooooooo wonderful surrounded by chocolate…a moist cake and a creamy buttercream swirl. It’s a lovely fall ensemble!

I created these cupcakes for more than my own selfish marshmallow needs, though. They are, first and foremost, a sweet treat to benefit sweet kids and their families who are dealing with cancer. I teamed up with OXO to Bake a Difference. For this blog post, OXO will be donating $100 to Cookies for Kids’ Cancer, a non-profit organization founded in 2008 by two OXO employees who were inspired by their young son Liam’s battle with cancer.

Be sure to keep an eye out for this sticker. Purchase any of these stickered OXO Baking Tools and OXO will donate 25 cents in support of pediatric cancer as part of the company’s $100,000 pledge to Cookies for Kids’ Cancer in 2013.

I had been wanting to try OXO’s cupcake corer, so this cause provided the perfect opportunity to do so. Previously, I was using a paring knife to cut little cone shapes out of the cupcake centers when I wanted to add a filling. Such a pain! This little tool turned out to be a super time saver, and proved itself worthy of being added to my gadget drawer. 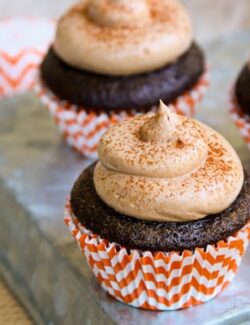 for the chocolate cupcakes:

In a large bowl, whisk all dry ingredients to combine. Make 3 large holes in the dry ingredients. In a separate smaller bowl, combine oil and vinegar. Pour this into the 3 holes. Pour the water over entire mixture. Mix with a fork. Add vanilla and stir. Divide evenly into the 24 cupcake wells. Bake for about 25 minutes, or just until a toothpick comes out clean. Remove cupcakes to wire rack to cool completely.

for the pumpkin spice marshmallow filling:

In a medium bowl, stir together all ingredients until incorporated.

for the chocolate buttercream:

In a stand mixer fitted with a paddle, beat the butter until creamy. At low speed, beat in the powdered sugar. Increase the speed to high and beat until fluffy, scraping down the side of the bowl, about 2 minutes longer. At low speed, beat in the cream, vanilla, cinnamon, and salt, then gradually beat in the cooled chocolate. Scrape down the side of the bowl and the paddle, increase the speed to medium-high and beat until light, 3 minutes longer. Using a wooden spoon, vigorously beat the buttercream for 30 seconds to deflate any air bubbles.

to assemble the cupcakes:

From a farmgirl’s dabbles, with chocolate cupcakes adapted from Mom’s Wacky Cake recipe.

I was not compensated to write this post. OXO provided me with a set of cupcake baking tools and will be making a donation to Cookies for Kids’ Cancer for this post.

We participate in the Amazon Services LLC Associates Program, an affiliate advertising program designed to provide a means for us to earn fees by linking to Amazon.com and affiliated sites. See our disclosure policy for more info.
Chocolate Cupcakes Dessert