by Brenda Score on September 13, 2018 (updated November 1, 2020)
Jump to Recipe
This post may contain Amazon or other affiliate links. As an Amazon Associate I earn from qualifying purchases. 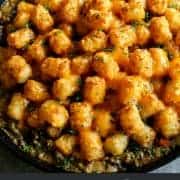 Tater Tot Hotdish is one of my husband’s top dinner requests, and classic comfort food here in Minnesota. My tried and true recipe features two ways to make it – with and withOUT canned soup!

Tater Tot Hotdish is One of my Husband’s Favorite Meals

If Blake were to create a Top Ten list of favorite meals that I make, I’m 100% positive this Tater Tot Hotdish would be included. And it would probably rank in one of the highest spots.

A number of years ago, I posted a photo of my homemade tater tot hotdish on Instagram and Facebook. And I was inundated with requests for my recipe.

Up until that point, I had never relied on a recipe for this favored dish of Minnesota culture. I had just used a few basic ingredients and thrown it all together, a little bit different each time.

But I promised those readers that I’d get serious and write it down to share with them. It’s been a hugely popular recipe ever since.

I’ve included two ways to make this tater tot hotdish. One is the much more traditional way, using canned soup. And the other – our family’s favorite – features a gravy made from scratch. Don’t worry, it’s easy to make. And it’s SO AWESOME GOOD!

I often field this question from people who don’t live in our part of the country.

Hotdish is the quintessential one-dish meal found at most any family reunion, funeral lunch, church supper, or potluck in the Upper Midwest. This dish, humble in appearance, is especially beloved in Minnesota, with whole sections of small town church cookbooks dedicated to the many ways one could be assembled.

Hotdish is basically Minnesotan for “casserole”. It’s a well-rounded meal consisting of meat (usually ground beef, but also chicken, turkey, or tuna), carbs (usually pasta, potatoes, or rice), and veggies (canned or frozen), cooked all together in one big vessel. And, oh yeh, hotdish usually incorporates cream of mushroom soup, often referred to as “Lutheran binder” in these parts.

I’ll never forget the first time our youngest daughter Tessa sat down to tater tot hotdish at our table. She took a few bites, laid down her fork, and asked, “So is this basically a whole bunch of different things thrown together in one pan?” Ha!

Blake was admittedly skeptical when I told him I was going to create a homemade gravy base for my tater tot hotdish. He questioned, “Why mess with a good thing?”

Because, I told him, I was convinced that I could create a tater tot hotdish recipe that tasted even more amazing than the one I had always made with canned cream of mushroom soup.

His skepticism fueled my fire.

I was going to do this!

Feel free to use my recipe that utilizes the canned soup, it will save some time – and it’s still very good. But I beg you to try my version with gravy made from scratch.

The gravy’s texture is perfectly creamy, less oddly gelatinous than the canned soup version, with a cleaner, richer flavor. Hatti, Tessa, and I all agreed that the hotdish with the homemade gravy was indeed superior to the canned version, as our family scrutinized both compositions side by side in a weekday supper taste test.

But Blake, holding fast to his love for canned tradition, said that he’d eat either one just the same. I think he was secretly surprised that I actually made his beloved tater tot hotdish without opening a can, and got it to taste that good!!

I give Blake credit for all the cheese you see melted over the top of the tater tot hotdish. It was his only suggestion when I was creating this recipe.

His motto in the kitchen could very well be:

Now I always add a good helping of sharp cheddar to the top of the tater tots. Because it IS pretty darn good, I have to admit.

But I always, always, always eat my tater tot hotdish with ketchup. It just seems natural with all those awesome crispy tater tots for dippin’. But to each his own; enjoy this dish any way you see fit!

Break out your recipes for your best Jello salads and pans of bars, and let’s have some fun with this, Minnesota style. Be sure to check out a few of my renditions to the classic tater tot hotdish recipe, with the flavors of bacon cheeseburgers, tacos, and this kicked-up version with top sirloin and some heat!

Here are more casserole and hotdish recipes for you!  Hamburger Hotdish from Melanie Makes. Our family loves sweet bell peppers, so I know this Stuffed Pepper Casserole would be a hit, recipe from Rachel Cooks. And I’m loving this Ramen Noodle Casserole from Amanda’s Cookin’!

both recipe versions from a farmgirl's dabbles

This post was previously published in 2014. Photographs and some of the text were updated in 2018.

We participate in the Amazon Services LLC Associates Program, an affiliate advertising program designed to provide a means for us to earn fees by linking to Amazon.com and affiliated sites. See our disclosure policy for more info.
Beef Dinner Ideas Recipes

93 comments on “Tater Tot Hotdish {2 ways…with and withOUT canned soup!}”