posted February 19, 2013 by Brenda // 140 Comments »
This post may contain affiliate links to products we use and love.
Want an extra special way to enjoy French toast? Try this quick and easy French Toast with Caramelized Cinnamon Orange Sugar!

I am so thankful for oranges and other citrus during the winter months, when our local fresh fruit supply is nonexistent here in the Midwest. It’s bright and cheery, and offers incredible flavor and color on our plates when the snow is falling cold and white outside. In both sweet (Orange and Dark Chocolate Scones with Orange Glaze) and savory (Roasted Cauliflower with Golden Raisins, Pine Nuts & Orange) dishes, my family has been enjoying the beauty of citrus this season.

I’ve been known to stir in the fragrant juice and zest of an orange into our pancake and French toast batters in the past, and those breakfasts have always gone over big for our family. So this past weekend, this concept was given a little different twist. I added orange zest to a cinnamon and sugar mixture, topped slices of French toast with it, and then cooked it until that citrusy sugar was all golden and caramelized and completely irresistible. Drizzled with a simple orange marmalade syrup, all warm and sticky, this French Toast with Caramelized Cinnamon Sugar proved to be another delicious hit. And it was so quick and easy to make!

* This is a sponsored post, created in partnership with Crystal Farms.

With the new French Toast Batter from Crystal Farms (a company based right here in the Midwest), I had a hot and delicious breakfast sitting in front of my family in record time. The batter is made with eggs, vanilla, and milk, and comes in a handy carton with a spout. It’s so quick and easy to use, that I actually found myself making the kids orange French toast on a hectic Monday morning, before I headed into work and our kids were off to school. I had saved the leftover cinnamon orange sugar and marmalade syrup from our weekend meal, and it helped to make Monday morning so much easier to step in to with a smile on.

Crystal Farms has also debuted two other new egg products. Simply Eggs can stand in for shell eggs in any baking or cooking recipe. And Scrambled Eggs has some buttermilk added to it, providing beautifully fluffy eggs every time. My husband and I are very much an eggs-for-breakfast-or-any-meal-of-the-day kind of couple, and we both found these products to be tasty and incredibly easy to use. It took only a few minutes to prepare a quick protein-rich weekday breakfast. And with a little more leisure time over the weekend, we indulged our hot skillet of eggs with some freshly chopped veggies and herbs, and a sprinkling of cheese. After making it through another week, an extra special weekend breakfast is always the perfect reward. 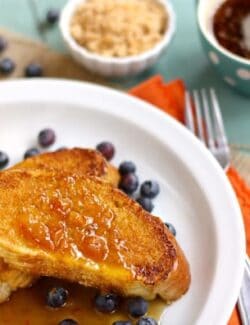 for the cinnamon orange sugar:

for the orange marmalade syrup (optional):

for the French toast:

Please note: This is not an exact recipe. Just make as little or as much as you want each time. The cinnamon orange sugar and the orange marmalade syrup keep well in the refrigerator, for future quick and easy meals.

Prepare cinnamon orange sugar by stirring together all ingredients. Set aside.

Heat a large nonstick skillet or griddle over medium heat. Melt a bit of butter in the pan. Pour desired amount of French Toast Batter in a shallow bowl, and then dip first bread slice in it. Turn bread over in the batter and then, while still dipped in the batter, place up to 2 teaspoons of cinnamon orange sugar on the top side of the bread. Spread to evenly coat that side of the bread. Then place the bread on the buttered pan, with the cinnamon orange sugar side down first. After the sugar has caramelized and turned golden, about 2 minutes or so, flip the bread and cook until done, another couple of minutes. Repeat process with remaining bread slices. Serve with warm orange marmalade syrup, maple syrup, or fresh fruit.

from a farmgirl’s dabbles

This post is a sponsored by Blogher and Crystal Farms. All opinions are 100% my own. Thank you for supporting the brands that help make this site possible.

We participate in the Amazon Services LLC Associates Program, an affiliate advertising program designed to provide a means for us to earn fees by linking to Amazon.com and affiliated sites. See our disclosure policy for more info.
Breakfast Recipes Sponsored Posts