I have been all over the latest salted chocolate and salted caramel goodies available at bakeries and in fancier candies.  And I’ve seen alot of people crinkle their noses at the combination.  Until they actually try it.  Once they have a couple bites, they’re usually hooked.  There’s just something so right about this combo.

I have been on a caramel kick lately, too, which is not a craving I’m used to.  Caramel frappes, caramel on my brownies, caramel on my ice cream, etc.  So when I was thinking about what to make to celebrate my mother-in-law’s birthday, her love of caramel was speaking my language.

I really wanted to do a chocolate cupcake topped with caramel buttercream.  I didn’t look any further than my recipe box for the chocolate cake recipe.  It’s known in my family as “Wacky Cake”, the only birthday cake my sisters and I ever knew as kids.  It’s a very straightforward chocolate cake with, for us Klein girls, very special memories attached.

As for the caramel buttercream, however, I had no clue where to begin.  I’ve never taken the time to make one of those fancy recipes.  But I knew what I wanted.  I wanted the silky smooth tons-of-butter kind of buttercream, a topper that wasn’t made with a bag of powdered sugar.   A buttercream that makes your eyes roll to the back of your head after you take a bite.  And I do believe I couldn’t have found a better caramel buttercream than the one from crispy waffle.

The recipe has a Swiss meringue buttercream base, with the caramel mixed in at the end.  It’s a time consuming little operation with a big pay-off.  I will definitely be making this again.  I made a double recipe for a hefty piling of frosting atop each of the 24 cupcakes (that’s 4 sticks of butter =  1.33 tablespoons of butter per cupcake, if you’re doing the math).  After I piped the buttercream onto the cupcakes, I drizzled some delicious Tastefully Simple Creamy Caramel Sauce over it  and finished it off with a sprinkle of flakey sea salt.  All I could think about as I was eating the super silky buttercream was ‘caramel popcorn’.  The slightly salty caramel flavor was fantastic.  And I ate way too much of it! 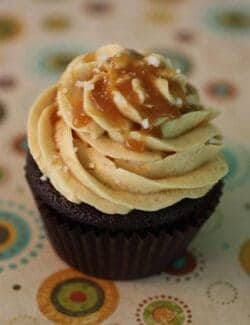 4 sticks of butter, at room temperature

Prepare 2 regular cupcake pans (24 cupcakes). You can use paper cupcake liners or just spray the cupcake wells with cooking spray.

Measure all dry ingredients into bowl and whisk to combine. Make 3 large holes in the dry ingredients. In a separate bowl, combine salad oil and vinegar. Pour this into the 3 holes. Pour the water over entire mixture. Mix with a fork. Add vanilla and stir. Divide evenly into the 24 cupcake wells. Bake for 25 to 30 minutes, removing from the oven as soon as a toothpick comes out clean.  This can also be made in a 9 x 13 cake pan – bake for approximately 35 minutes. 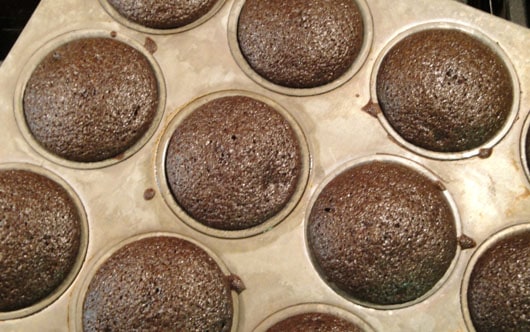 Add the sugar to a small saucepan and pour the water over it. With the heat on low, swirl the pan around until the sugar has nearly dissolved. Be careful not to let it boil.  If it starts getting too hot, remove it from the burner for a few seconds, while continuing to swirl.

Once the sugar has mostly dissolved, raise the heat to medium-high and bring the mixture to a boil. Cover it immediately and let it boil for 2 minutes.

Uncover and continue swirling the mixture until it becomes dark amber. Be VERY careful here. You want it to be dark, but it can go from dark to burning in seconds. Once it goes from golden amber to dark amber, take it off the heat immediately.

This is what the sugar and water mixture looks like when it first starts to boil. 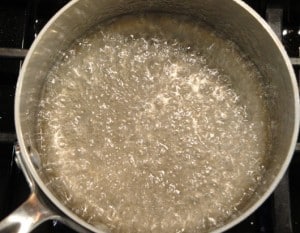 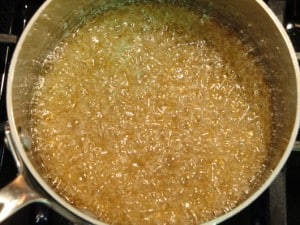 Very near the dark amber stage, be prepared to get it off the heat FAST! 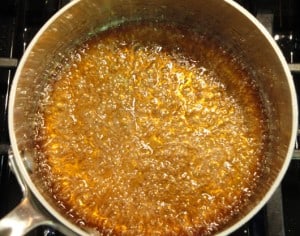 Slowly pour in the cream, stirring with a whisk. Be careful, as the caramel will start splattering if you pour too fast. Whisk until combined and set aside. Let caramel cool to room temperature.

Combine the egg whites, sugar, and cream of tartar in the stainless steel bowl of an electric mixer (i.e. your KitchenAid bowl). Bring a large pan of water to simmer on the stove, making sure that when you place your mixer bowl into it, that the bottom of it is sitting in the water a bit. Set the mixer bowl in the pan of simmering water and whisk constantly until the mixture is extremely foamy and reaches 140 degrees on an instant-read thermometer. Be really careful not to curdle the egg whites. If it feels like that’s happening, just remove the mixer bowl for a bit.

Remove the bowl to your stand mixer and beat on high speed for 3-5 minutes, until the meringue mixture holds glossy, marshmallowy peaks. Remove the meringue to another bowl and place the empty mixer bowl back on the stand mixer. Add half the butter and one-third of the meringue to the mixer bowl and beat until well combined. Continue to add the remaining two-thirds of the meringue a dollop at a time. The mixture may look curdled at this point, which is a bit alarming after going through all this work, but adding the remaining butter a tablespoon at a time will smooth things out. It really does come together at the end. 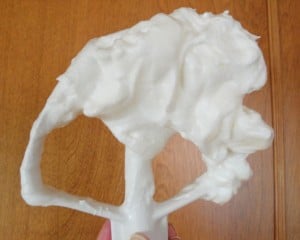 With the mixer on low, add the room-temperature caramel and mix until well-combined. Do not add warm/hot caramel, as it will melt the butter!

Top your cupcakes with the buttercream, drizzle on your favorite bottled caramel sauce, and sprinkle with some sea salt to finish them off.

Yield: enough to put a large mound of buttercream on each of 24 cupcakes

for the cupcakes:  Mom’s recipe box

for the buttercream:  crispy waffle